If you’re reading this post, chances are you’ve done some field recording. If you’ve done a lot of field recording, chances are you’ve had a few run ins with police, security, and the general public where they thought you were up to no good. I’ve written about one of my not so pleasant run ins with police while recording trains, but I’ve noticed a number of similar stories pop up on blogs and social media. I thought it might be fun to compile a list of these stories for everyone to read (and maybe learn from).

Jay-Dea Lopez, writes about how the police thought he might have been trying to blow up a bridge.

…While packing-up my recording equipment I noticed two police officers walking towards me. Call it a guilty conscience but I instantly knew they were coming to “have a chat”. And so they did. After introducing themselves they asked what I was doing, having been monitored by cameras on the bridge.

I was asked to empty out my bag, show them my microphones and recorder and explain why I felt the need to record the bridge. And there, on a sunny winter’s afternoon in Brisbane, I had an impromptu discussion with the city police about field recording and “sound art”…

Watson Wu encounters a very friendly police officer while recording ambiences. He’s uploaded the encounter for all to hear!

You can listen to the recording at Watson Wu’s Blog.

Steven shared a ticket he received for placing contact mics on railroad tracks in the Field Recording Facebook group .

• Not the Ideal Situation – Anonymous

The anonymous story comes from the master of suspicion:

In the days following the, so called, terrorist attack in Denmark February this year, I wanted to make close-up recordings of a train passing by on tracks near one of the train service stations. It was very windy, so I wore a arabic-looking scarf around my head whilst shielding my recorder, which was held by a pistol grip, with an improvised windscreen using a winter hat. At the same time there had been quite a lot of reports of copper theft near train tracks in the recent months. I kneeled at the tracks wanting to record the rumbling of the tracks themselves. I looked up just as the train was passing to give a little nod and smile to show that I was doing nothing suspicious, all I saw was three people in the driver’s cabin all filming me with their smartphones to get a good look at my face. I laughed about it and I heard sirens when leaving. I undoubtedly looked suspicious concealing a pistol-looking contraption wearing a scarf around my head, big bushy beard and tactical jacket.

These were tales that were told without much context:

Was chased away by a police helicopter from some derelict land near London recently. The helicopter kept buzzing me for about 20-30 minutes until I was well away from the area.

I was kicked off the Sydney Harbour bridge for trying to record it with contact mics.

I have had police officers make remarks about “terrorism” (I am South Asian after all – what else should they assume!) and on occasion, sexist remarks, “do you know what you are doing with that luv” for example.

I’ll end with a new story of my own. I’ve been recording around Chicago in some slightly shady places for a new library I’m working on. Recently I found myself underneath Lake Shore Drive recording the traffic from below. There are a few public spots you can do this from, but there’s always people walking by… and where’s the fun in that?

I had found an open gate that may or may not have had a sign saying it was for emergency vehicles only. I peered in, no one was there so I went in to record. Not but two seconds after I set down my bag I heard a car pulling up where I had entered. I looked over and saw it was a police car. “Crap!”, my mind said. But on the outside I was cool as a cucumber. I casually nodded at the officer, then continued to set up my equipment. To my surprise, it worked! The officer parked for a couple minutes, I’m not sure if they were watching me or doing something else, but I went on like no one was there, and soon they pulled off. I had the whole area to myself and got some neat recordings in a place I probably wasn’t supposed to be in the first place. Here’s an example: 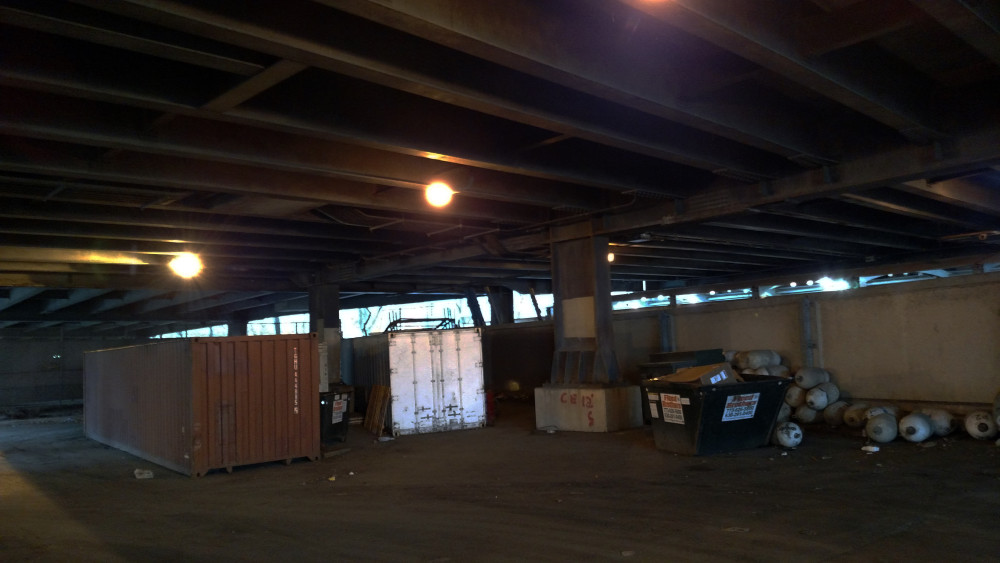 If you have a story of your own, post it in the comments below or get in touch with me using the contact form on this blog. I’ll update this post with any good ones!

So what’s to learn from all of this? Well, if you’re really looking for attention, use contact microphones. And if you do attract attention, just play cool.

2 thoughts on “The Weirdos with Microphones”